A few months ago I picked up a Nikon SB-700 as a second speedlight, and although it may be a inexpensive flash (compared to the SB-910), that does not mean that it is any less usable. This is a somewhat semi-formal review of the SB-700, since I don't shoot with flashes a lot, thus I don't feel like I can give this unit what I would call a in depth review. My first speedlight the venerable Nikon SB-800, has been very useful to me over the last few years, so how does that last generation high end model compare to the modern midrange SB-700? 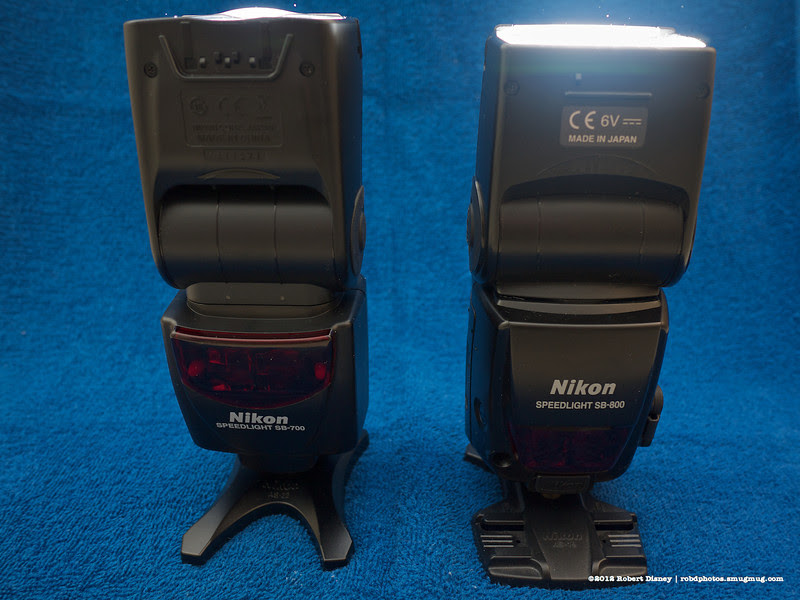 The first thing you notice about the SB-700 is that it is about the same size and weight as the SB-800. That is a good thing, because flashes like the SB-900 and SB-910 are simply huge, and somewhat heavy to use on camera. If you need that kind of flash power they are great, but if not these smaller units are far easier to transport in your camera bag. In addition, you could almost pickup two SB-700's for the price of a single SB-910, which from my perspective, would provide a far more flexible lighting setup. The SB-700 has a slightly longer flash head than the SB-800, and it also has a chubbier body, due to how batteries are placed.

In terms of build quality, the SB-800 is clearly made of higher quality plastics, it just feels like it is made better when you hold the unit. No doubt this sense of superior build quality comes from the fact that the SB-800 was made in Japan, while the SB-700 is made in China. Considering that the retail price of the SB-700 is cheaper than the former retail price the SB-800, that makes sense. The stand for the SB-700 is plastic, even the tripod mount, while the mount for the SB-800 has a metal socket. Those are just small things that make the SB-800 a little nicer to use, but not deal breakers by any means. 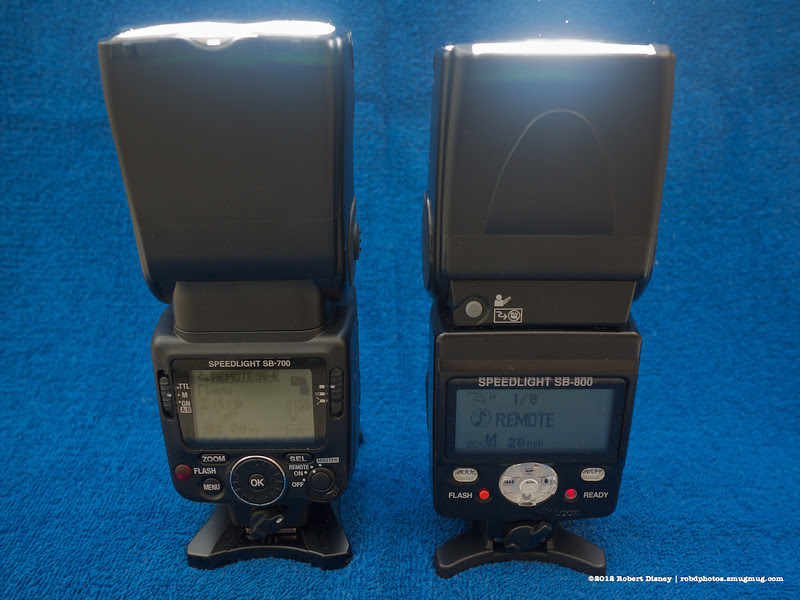 The user interfaces of the SB-700 and SB-800 are completely different, with the SB-700 being the easier of the two to operate. The primary reason behind this is that the SB-800 uses a pictorial menu driven UI, while the SB-700 has more buttons and a control dial. Even accessing the menu on the SB-800 is less intuitive (you have to press and hold the SEL button), verses and actual menu button on the SB-700. Manually zooming the flash head on the SB-800 is a one touch action (left or right on the D pad) vs a two button action on the SB-700 (press the zoom button and turn the dial), but most users will leave the flash on auto zoom if the flash is on camera. Off camera the effect isn't very important either, if anything having to press a button before zooming the flash head is a good thing, preventing accidental changes. In practical terms both flashes are easy to use once you get used to the interface, but the SB-800 is less intuitive, and you have to read to manual to figure out what all the different menu items are.

If you go by features alone the SB-800 would be considered the better of the two speedlights, since it is has a more powerful guide number at ISO100 (at least 1/3 of stop more power), it has a PC sync port for supporting a wired flash setup, and can command 3 wireless flash groups vs 2 groups on the SB-700. The SB-800 can also have an extra battery added, an included extra clip on accessory, for fast recycling times. In addition the SB-800 has a socket to accept external power, either AC or a battery pack, via optional accessories.

The zoom head on the two flashes is similar, but the SB-700 supports lens up to 120mm (FX), while the SB-800 only reaches 105mm (FX). Both lenses zoom to 24mm (FX) and can support 14mm with the included defuser domes. The SB-700 can detect whether it is on a DX or FX camera, and it changes zoom settings accordingly (the SB-800 always zooms based on FX settings). Both flashes can be rotated and tilted in a similar manner, but the SB-700 head will rotate all the way around in either direction, while the SB-800 will only fully rotate by turning it to the left (from the rear of the unit). 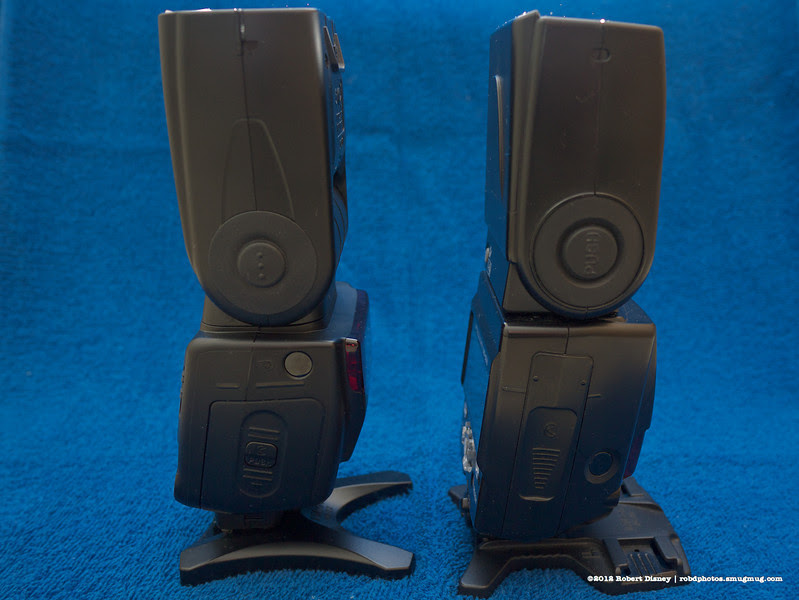 When you start getting into the small details though, the SB-700 has some advantages over the SB-800. First of all, the flash head itself is slightly bigger, and creates a softer light. You can also control the spread of the flash beam, whether you want it wide, normal or narrow via a switch on the back. Secondly the AF assist light (for use on camera) has a superior output and works with all 51 AF points of Nikon Professional cameras (D4, D3 series, D700, D300s), 39 points (D7000) or 11 on the entry level cameras. On the SB-800 the focus assist light only works with 15 points (in the centre). Placement of the assist beam emitters are also higher up on the flash body, making the AF assist lights work better with lenses like the Nikon 24-70 and 70-200mm VRII, which have large lens hoods.

Also, the SB-700's flash readiness button also doubles as the flash testing button, on the SB-800 these are separate. One of the biggest differences you will notice between the two units is the sound they make while recharging the flash unit. The SB-800 lets off a constant buzzing noise while the capacitor is recharging, while the SB-700 is practically silent. In a quiet setting, like a play or a speech, this could be important. 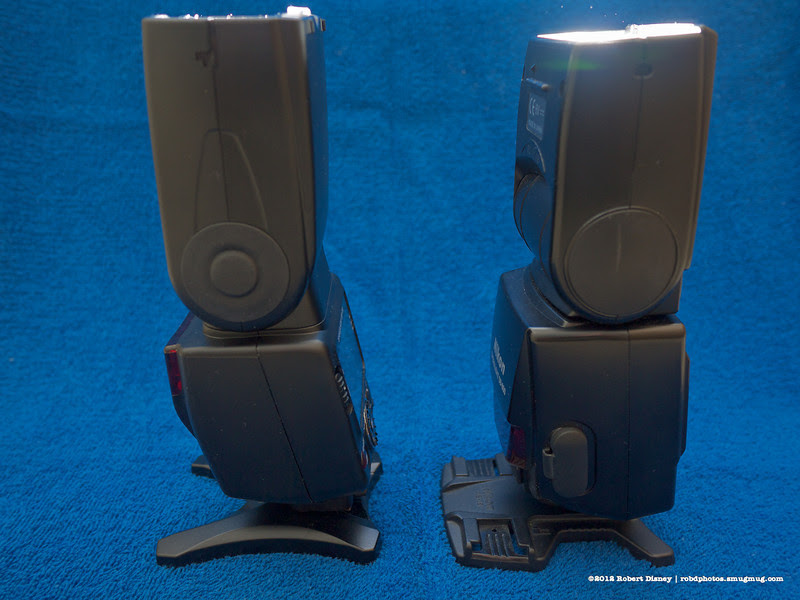 Conclusion:
In the real world there isn't a big difference between these two units, at least once you have them setup and start shooting. When using a multipal speedlight setup, I generally use SB-800 the commander unit, simply because it can control more wireless groups in the CLS system. The PC sync ports built into the unit also make it easier to use with third party wireless trigger, should the Nikon CLS system be restrictive for a particular shooting situation. You can add a PC sync port to the SB-700 via a hotshoe accessory, but that is just something else you have to remember to bring along.

When using an individual flash on camera the SB-700 would be the unit of choice, because it has a more initiative user interface, is quieter, recycles a little bit faster and the AF assist beams work with all 51 AF points of my D700.

If I was starting from scratch today, I would likely grab a couple SB-700's rather than a used SB-800, but I don't use some of the features that the SB-800 offers. Considering the used price of an SB-800 can be lower than a new SB-700, grabbing one or two isn't a bad deal if you are budget restrained or need the features it offers.

Video Overview Of The Nikon SB-700


Video Overview Of The Nikon SB-800