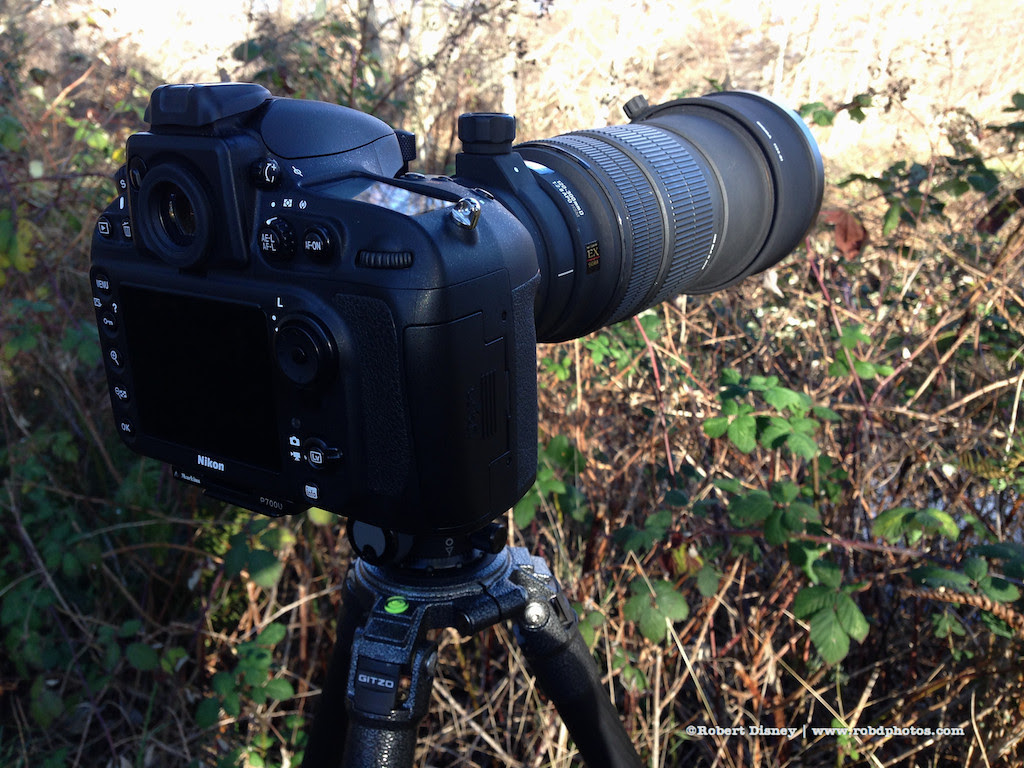 Introduction:
Amateur, and semi-pro sports and wildlife photographers are often forced to compromise when it comes to lenses, due to a lack of high quality budget options. As a result many have turned to variable aperture super zoom lenses, to get the desired zoom range, but that is a compromise that can often lead to frustration. There are some high quality options available, allowing users to avoid variable aperture lenses, but some of them have been overlooked by those who do not consider third party options.

In the past third party lenses, and particularly those made by Sigma, were known for having quality control or functionality problems, but in the last three years the larger third party lens makers have been taking steps to move past that. Part of the negative feedback often came from users who had bought inexpensive super zoom lenses, only to be disappointed by the poor performance. While some of the lower end third party glass may have a deserved stigma, the high end Tamron SP, Tokina AT-X and Sigma EX lenses (updated versions are often called Art or Sport models) have often been praised, although with some hesitation. That hesitation came from the previously mentioned quality control issues, that these companies have been working to improve. While there are still some issues with third party lenses, the reasons to not buy them have decreased in recent years. 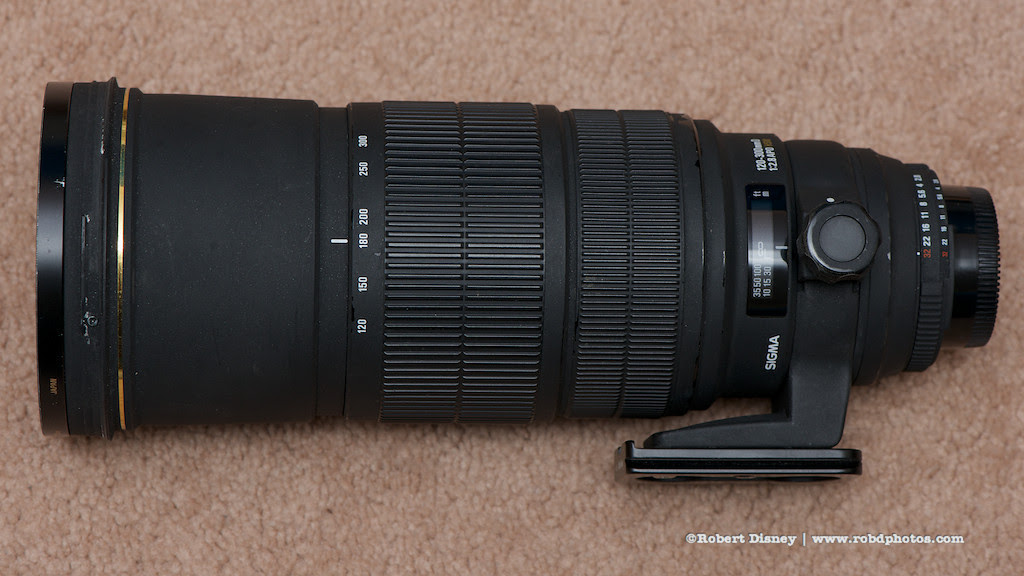 One of the better third party options is the Sigma 120-300mm F2.8, a high quality zoom lens, offering a flexible zoom range and a fixed aperture. This particular lens gives users the ability to shooting at F2.8, or to use teleconverters to achieve greater reach. The lens has three different versions released as of December 2013. The first variant, covered in this review, was followed up by two versions with optical stabilization (OS). While the optical design of the three lenses is similar, the newer versions have OS (optical image stabilization) and are slightly heavier. The newest "Sport" version features a computer connection, which allows the user to update and make adjustments to the lenses firmware (optional USB dock required). 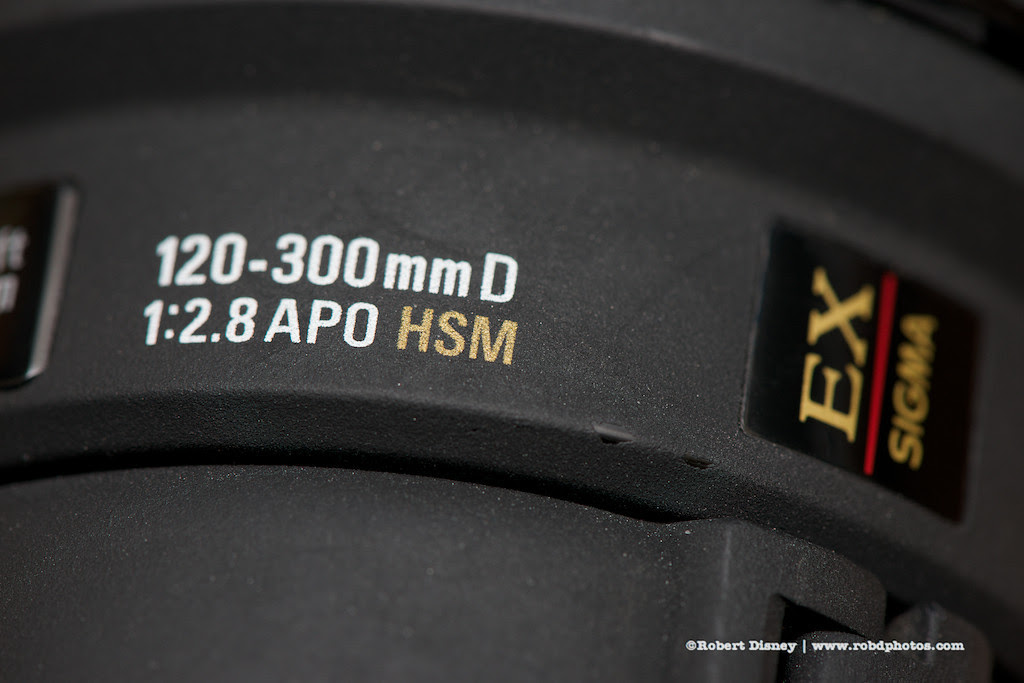 The outer barrel of the first version of 120-300mm F2.8 is metal, painted with a slightly rough crinkle finish. The result of the metal construction is that the lens is extremely tough, and heavy (approximately 2900g). The outer paint on the barrel seems to have a tendency to peal, and has been reported to be a problem with many EX Sigma lenses from the same era. The newer versions of the lens have a different coating, but they have not been on the market long enough to know if they suffer from similar problems. Since the paint issue is purely cosmetic, it is not something to fret about, unless resale value is important. 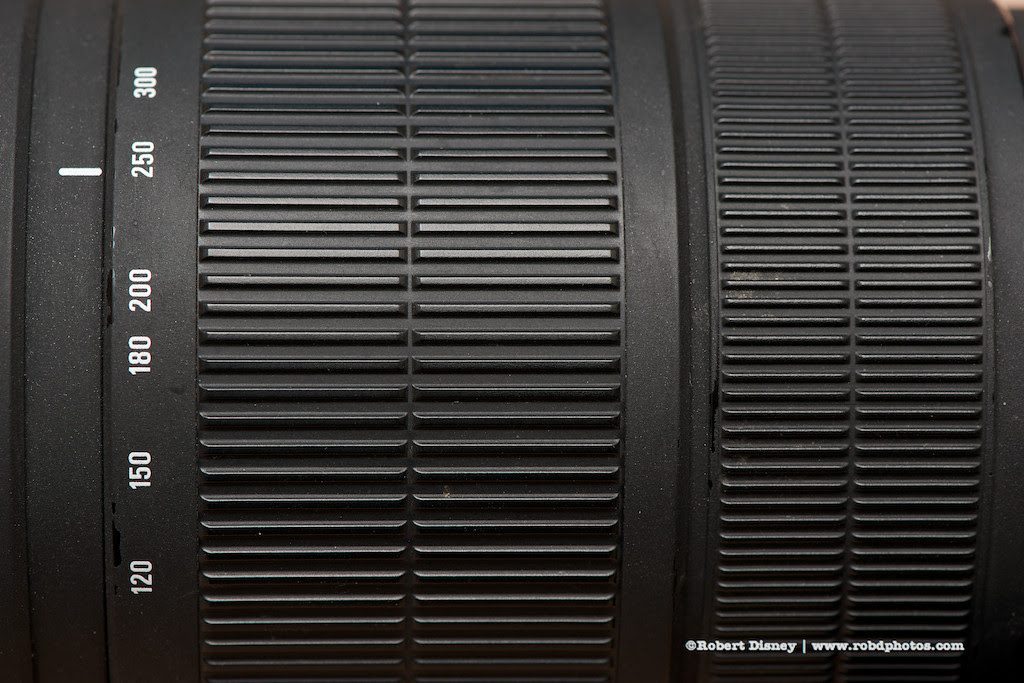 The large zoom and manual focus rings are covered with ribbed rubber that makes turning them possible, even with mitts or gloves on. The zoom ring feels a little stiff, most likely a result of the weight of the lens elements that are being moved while zooming. The zoom ring itself turns the oppose direction of most Nikkor zooms, not a big deal, but it takes getting used to. The manual focus ring turns smoothly, but has a rather short travel. Overall manual focus is okay for a modern auto focus lens. Due to the proximity of the focus ring to the zoom ring, care needs to be taken when blindly reaching for one or the other while looking through a cameras viewfinder. Over time that becomes less of an issue, but do not be surprised if a few shots are missed while familiarizing yourself with the layout. Thankfully both zooming and focusing of the lens are internal, so the physical size of the lens does not change at any point.

Unlike many modern telephoto lenses there are no switches on the lens body. Yes, not even a switch to turn off auto focus, that must be done from the camera body (Nikon Version). Thankfully the camera has an HSM focusing motor, so auto focus with manual override is possible. The lens also lacks any kind of focus limiter switch, which is a little disappointing. I say that because the lens does focus as close as 1.5m (120mm) / 2.5m (300mm), which can be rather close, depending on the subject matter. More on that in the auto focus performance section of the review. 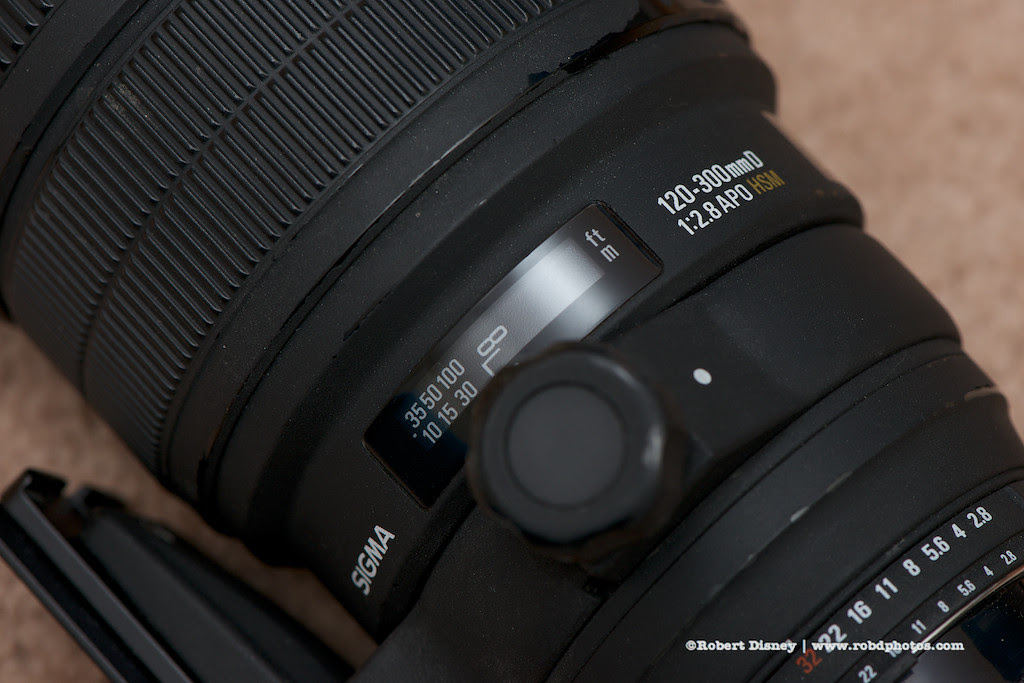 The lens features a focus distance scale, although it is not overly usable for setting focus on it's own, and is useless for hyper-focal settings. The lens also features a removable tripod collar, which is rather stiff. The stiffness seems to come down to the weight of the lens itself. If you try rotate your setup by the camera body it will move in a rather jerky fashion. The lens rotates more smoothly if you rotate the lens body with one hand, and holding it up slightly with the other. Regardless, the collar supports the lens adequately, due to the short height of the foot, and more importantly it is easily removable (see video overview at the end of the review).

Being of an older design, this version of the Sigma APO 120-300mm F2.8 still features a physical aperture ring, meaning that the lens will be usable on a wide range of Nikon cameras, even older all mechanical film cameras. 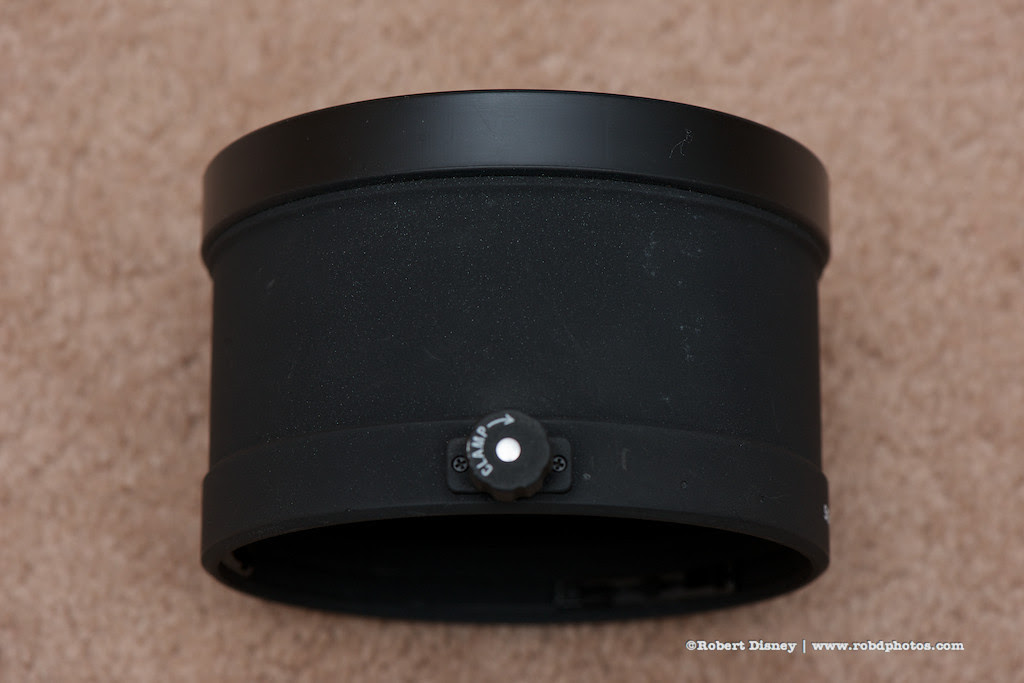 Then lens also shipped with a screw on hood, soft lens cover (front), stand front cap, standard Sigma rear cap and a case. While the included hood might seem short for a lens that reaches out to 300mm, it is important to remember that it needed to be designed not to cause vignetting at 120mm.

In terms of actual focus performance, speed is more than fast enough for most subject matter. Thanks to the HSM focusing motor, and a wide aperture, the lens is snappy and generally very actuate. While focus speed does not match the likes of the Nikon AF-S 300mm F2.8G VRII, or Sigma's own APO 300mm F2.8 EX DG HSM, it is not too far behind. As one could expect focus is most accurate when using central cross type auto focus points. While the non-cross type points are usable, it is not recommended to use them in low light or dark shadows. That is more of a camera issue, than one of the lens itself. Focus accuracy does drop off in poor light, even with the central points, but that is normal, even for first party lenses.

Focus performance could have been improved slightly if a focus limiter was included, I would have liked to see a 5m to infinity limiter, but the lack of that feature is not a deal breaker. Why would a focus limiter help? When the lens does miss the mark it has a tendency to hunt, or even give up all together if focus misses and is not reacquired quickly.

Note: Focus performance based primarily on use with the Nikon D800. I found that performance was slightly weaker on older bodies like the D700, on which the lens tended to struggle to focus more often in lower light conditions (as expected due to the differences in the auto focus systems in said cameras).

Sigma APO 2x EX DG - Decent performance:
When using the Sigma APO Teleconverter 2X EX DG focus is still reasonably fast. While using the teleconverter tracking fast moving subjects, like birds in flight becomes more difficult, but is not impossible. When the lens fails to focus is goes into a cycle of hunting for focus and then gives up. The hunting issue is far easier to trigger when using the 2x teleconverter, but is expected given that the maximum aperture falls to F5.6.

As usual for reviews here, no test charts or brick wall tests have been performed, just comments based on real life usage. The Sigma APO 120-300mm F2.8 EX DG HSM performs rather well, given the modest cost for the zoom range and wide aperture. At F2.8 the lens performs well in the center throughout the zoom range. The edges are, as expected, not as sharp, but are still usable. At F4 the sharpness is good throughout the frame, although still a little weak in the far corners. In the F8-F11 range sharpness is very good.
As expected for an F2.8 lens, subject isolation wide open is excellent at all focal lengths. Bokeh is generally smooth, with slight signs of harshness in bright areas, wide open at F2.8. As the aperture is closed down to F4 and smaller, the harshness increases and in some situations is not overly appealing.

Bokeh does look better as the distance to the background increases, which is basically a standard issue with most super telephoto lenses.

Vignetting is present at F2.8, but does not seem to negatively effect most images. Chromatic aberrations have not proven to be an issue. I have noticed that the D800 tends to overexpose slightly with the lens, so dialing in -0.3ev is often required to prevent blown highlights.

After looking at the samples you may have noticed that all the sample shots are taken at 300mm, which is a result of how I tend to use the lens. That said I have used the lens at other focal lengths and it seems to perform just as well.

Optical performance with a teleconverter:

When using the Sigma APO Teleconverter 2x EX DG I found that sharpness does drop off wide open. Note that it becomes a 240-600mm F5.6 lens with the 2x TC. I would recommend using the lens stopped down to F8-F10 for maximum sharpness. Subjects that are closer to the camera will appear the sharpest, as there will be less atmospheric interference.

The Sigma APO 120-300mm F2.8 EX DG HSM is a great lens to consider if you need the flexibility of the zoom range, or simply don't want to fork out the extra cash for a fixed 300mm f2.8 lens. Sharpness and focusing speed are generally good, to very good. While it cannot compete with a first party fixed 300mm f2.8, the optics are close enough that most viewers of your images will not notice the difference.

The lens is far from perfect, as the paint on the outer barrel has a tendency to peal. The tripod foot gives the lens enough stability, but it can be a little stiff to turn. The lens can hunt, or give up trying to focus when it misses, but that is not unusual for a long telephoto lens. While this zoom does seem to hunt more than the Nikon 300mm F2.8G VRII, the two aren't directly comparable, since Sigma has to hack lens firmware to get their lenses to work on Nikon cameras in the first place (Nikon does not release focus firmware information to third parties).

With a 2x teleconverter performance does drop off, in terms of sharpness and auto focus speed, but that is expected behavior.