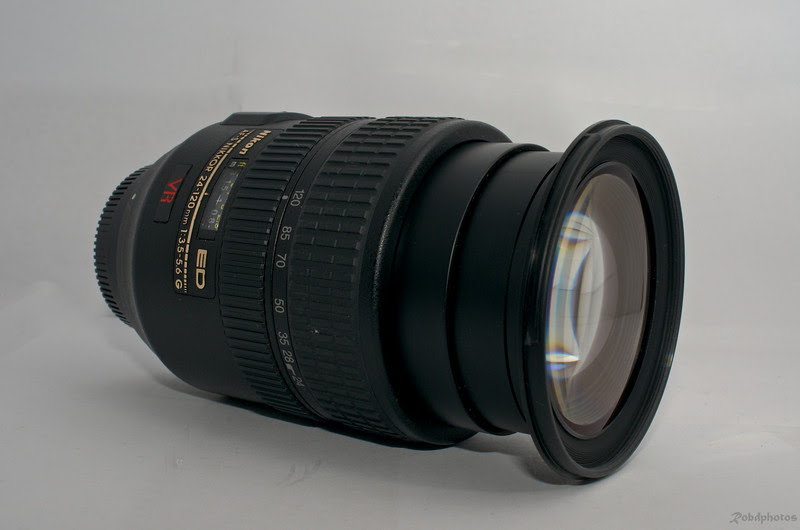 Introduction:
The Nikon 24-120mm VR has been called one of Nikon's worst lenses every made, by many reviewers. I'll be upfront right from the start, it is not the best lens in the pro-sumer range of lenses that Nikon has produced during the last 50 years, but to say it is one of the worst, I'm not so sure. So does the kit lens for the D700 perform as badly as some would have you believe, or is the performance on par with kit lenses from Nikon in the past?


Review Based on use with Nikon D300
Build and Mechanical Quality:
The lens exterior is all plastic, with hard rubber on the zoom and manual focus rings. The build quality is on par with the Nikon 16-85mm VR and 18-200mm VR, and like those two lenses it has a metal mount. Unlike the 16-85mm VR and 18-200mm VR, the 24-120mm VR lacks the rubber dust/water rubber mount gasket, which is unfortunate, but build wise, I think that is the only thing it is missing. I would place the build quality of this lens slightly above that of the 18-70mm G ED DX lens though, as the barrel, when extended, does not move up and down when touched.

The zoom ring on my copy is a little stiff, at times. The stiffness is not apparent at first, such as when you go from one extreme to the other, but more so when you try to move the zoom to on of the marketed focal lengths on the barrel. When attempting to shift from 24mm to 50mm for example, I can get close to 50mm with no trouble, but when I try to line the lens in line with the marking on barrel, then the stiffness comes into play. Nikon may have made the lens barrel stiff to prevent damage to the barrel as it extends, or to prevent zoom creep, so I guess it is a trade off. The manual focus ring is not bad for a lens in its class, and I find it easier to manually achieve focus quickly and accurately than with the Nikon 18-70mm DX lens, for example. 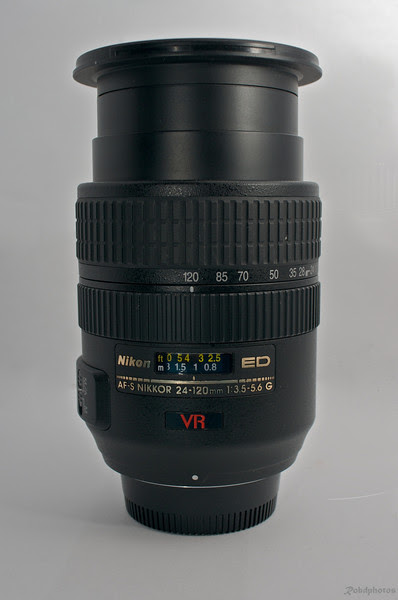 Auto Focus:
The 24-120mm VR is equipped with AF-S, and it is fast and quiet for the most part. You will find that AF speed changes slightly the more you zoom out. AF is fastest at 24mm (F3.5 max aperture) and is slowest at 120mm (F5.6 max aperture). That being said, it is faster than most "D" lenses, and is the AF noise created by the internal motor is virtually non existent. In a quiet room you can hear it, but it is no louder than an of the other pro-sumer AF-S lenses, and is quieter than the DX kit lenses (18-55mm VR and 55-200mm VR). AF is accurate, even in lowish light, although it may struggle sometimes on the long end in dim conditions.

Image Quality: (Based on use on a 12MP DX Nikon DSLR)
On a DX camera body, some of the issues that other reviewers have discussed go away, such as vignetting. There are hints of barrel distortion on the wide end of the lens (24-28mm), but no as much as if you used the lens with a FX sensor or film. I find the lens to be sharpest around F8, generally speaking, and would put IQ in the same class as the 18-200mm and 18-70mm DX lenses. In other words, image quality is not even close to being best in its class, but not the worst by any means of the imagination, at least on a DX body. Now, I do realize that this lens was made to use on a full frame (FX) body, so there may very well be some merit to other reviewers comments about this lens, but within the context of my use of the lens, the image quality is acceptable.

Comments and Conclusion:
I bought my Nikon 24-120mm VR for about half the retail price, used, which for the purpose I have been, and will continue to use it in, is about what the lens is worth, from my point of view. I find the focal range makes it very nice to have along side my Tokina 12-24mm F4, and thanks to the VR is usable indoors even though it is not the fastest lens on the market for the price. You just have to remember that VR/IS is for stabilizing the image, not for freezing motion. The lens preformed rather well, and I took all, but a few of my Christmas photos with the lens. I even handed my D300 with the 24-120mm VR off to some relatives and even though they used the camera in program mode, the results were still very good for a lens in the pro-sumer range. Of course the downside of getting it used was that I did not receive the original lens cap, and hood. They did send it with a decent UV filter attached for protection, so its not bad. I did not notice any meaningful difference in image quality when using the filter so I kept it on for protection reasons. I might take the filter off once I get myself the proper lens cap and hood, at some point.

Cons:
- Soft, even stopped down
- Barrel Distortion is and issue, even on a DX camera
- Not very wide on a DX body, fine on film/FX
Posted by Robert Disney