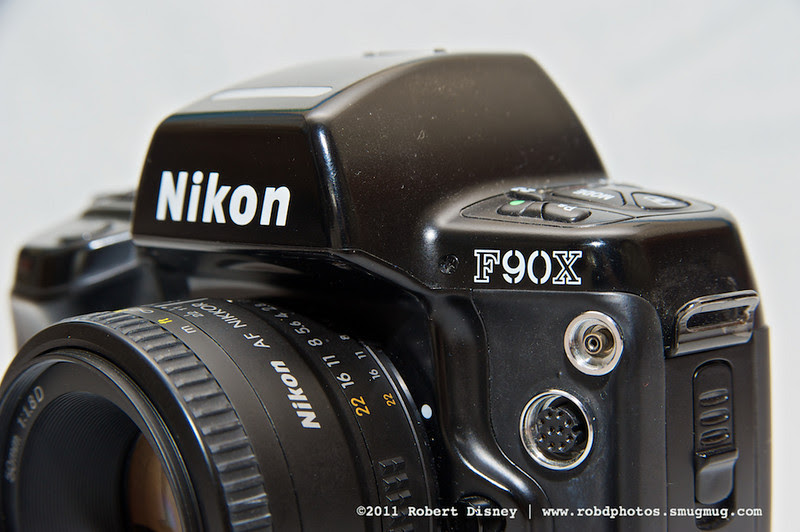 Introduction:
The Nikon F90X (N90s in the US) was released in the mid 90's as a replacement for the F90 (N90 in the US). There were a number of changes introduced in the F90X, including: better weather sealing, 1/3 stop changes in shutter speed, rather than 1/2 in the F90, faster continuous frame rate (4.5FPS), and faster auto focus performance, thanks to a cross type AF sensor and the beefing up of the bodies auto focus motor.

One of the first thing that you'll notice about the the F90X is that the design is different from modern Nikon SLR cameras, and that is because the design dates back to 1992, when the original F90 was release. Nikon discontinued production of the F90X in 2001, shortly after the release of the D1 series of digital SLR cameras. By that time the F90X had been replaced by the F100, the digital replacements of this line of cameras includes the D100, D200, D300(s) and D700. The F90X was also the last consumer/semi-pro camera to be made in Japan, starting with the F100 the cameras were made in Thailand.

The F90X/N90s make great cameras for someone looking to get back into film, partly because the camera supports AF-S lens, although not VR. I'll have more to say on this in the conclusion. 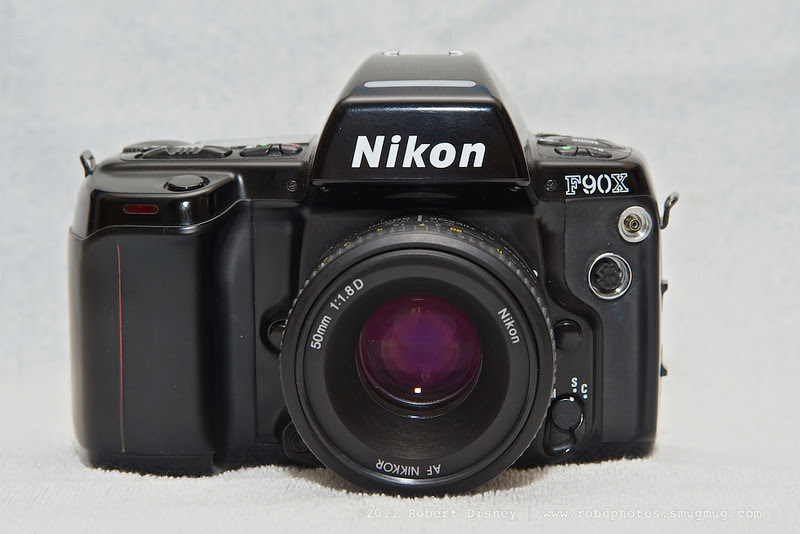 Build Quality and Handling:
The build quality of the F90X is exceptional, and is comparable to the build quality of cameras like the D300 and D700. It has a number of seals to protect the camera from dust and moisture. I don't think the weather sealing is as good as the newer models, but it is good enough for light rain. It also features a tough metallic chassis, under the rubber grip and industrial strength plastic cover.

The handling of the camera is similar to current semi-pro models, although it is not as refined as the current models. The grip is comfortable, and you wont find your fingers sliding off the camera thanks to the rubber grip. The rubber is harder than that found on the modern D300s, but still is effective. Once you load the four AA batteries, which are needed to power the camera, it weighs about the same as the D300s with it's battery pack. It can be a stretch to use a few of the buttons on the top right side, but otherwise the control layout is well thought out. 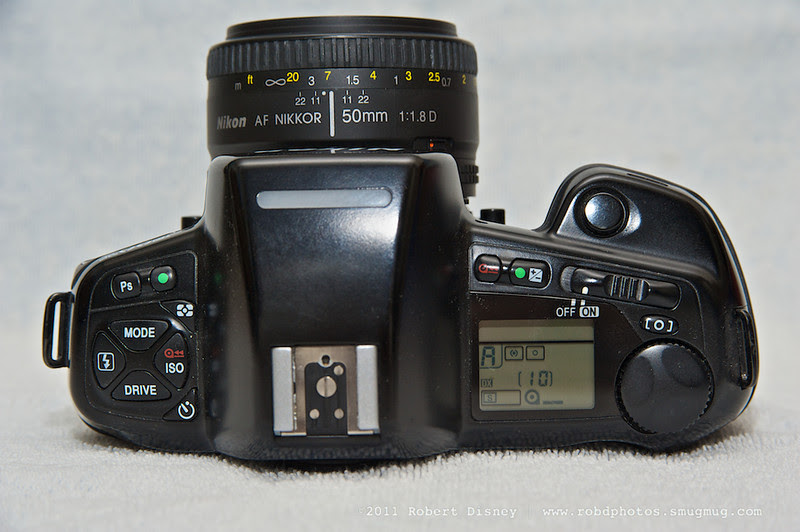 The Viewfinder:
The viewfinder of this camera has 92% coverage with a 50mm lens. Although the camera does not have 100% coverage it is big. The pentaprism, is very large and the focusing screen is clear, giving the user a bright view. To put it into perspective, it makes the 100% viewfinder of the D300 look like a tunnel in comparison. Manual focusing is a breeze with the F90X, thanks to the viewfinders massive size compared to the best crop sensor viewfinders found in the the market today. The F90X also has a built in eyepiece curtain, like the D700 and D3(s/x), for when you are taking long exposures. I love this feature, and not having to worry about loosing the tiny piece of plastic that swaps out with the eye piece cover of modern DX bodies is nice. 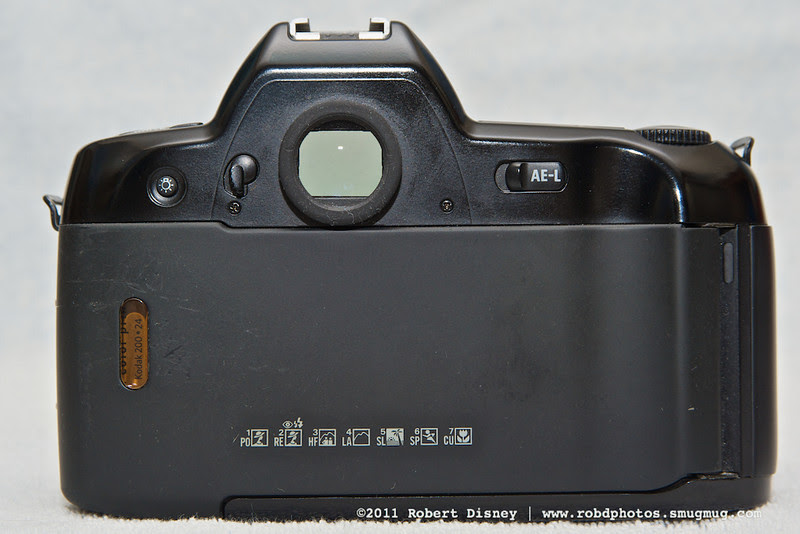 Controls and Basic Operations:
On the front of the camera there are two buttons on the right side, the AF-L button and above that Depth of Field Preview, which is fully mechanical and works even when the camera is turned off. On the left side of the front there is a switch for Manual focus, AF-Single and AF-Continuous, just as there is on the D100, D200, D300, D700 and D3 series. On the back of the camera there are two buttons, AE-L on the right, and on the left beside the eyepiece switch, one for turning on the backlight for the top LCD. The backlight has a distinct humming noise to it.

The top of the camera has a 4 button pad on the left to control the Mode (Program, Shutter Priority, Aperture Priority and Manual), ISO (When DX coded film is loaded the camera automatically sets the ISO rating). The ISO button is also pressed in combination with the film rewind button on the right side to rewind the film after a roll is finished.  Flash mode (there is no built in flash), and the Drive mode (continuous or single frame). The button on the top left side controls the program modes, and the button with the green dot is used in combination with the green button on the right to set the camera back to default settings. 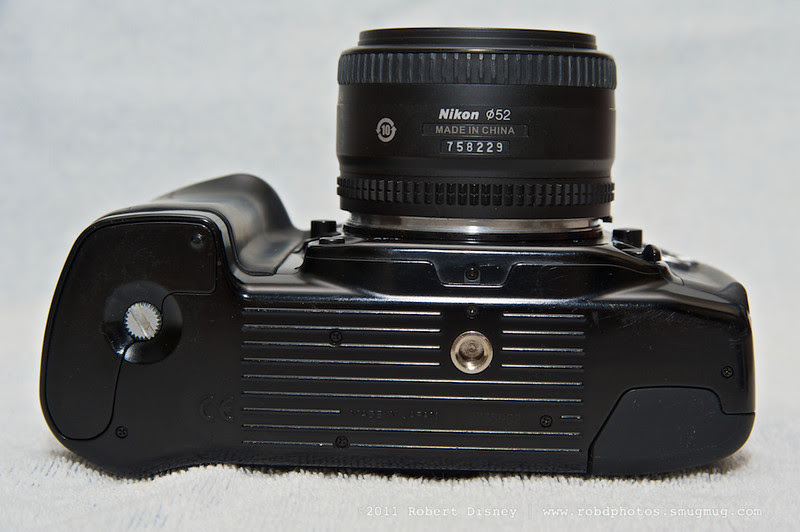 On the right there is a control dial, the sliding ON/OFF switch, exposure compensation +/- (Second Green Dot button for settings reset), one of the film rewind buttons (the other being the ISO button), a button to control the AF zone (Wide or circle), and last but not least, on the top right side, the shutter release. The shutter on the F90X feels very smooth, not as smooth as the D300, but nicer than the consumer DSLRs that Nikon makes today. The top LCD on the right side of the body tells you all your shooting information, such as how many shots you have taken (taken, not number remaining), shutter speed, aperture, metering mode, and flash settings. 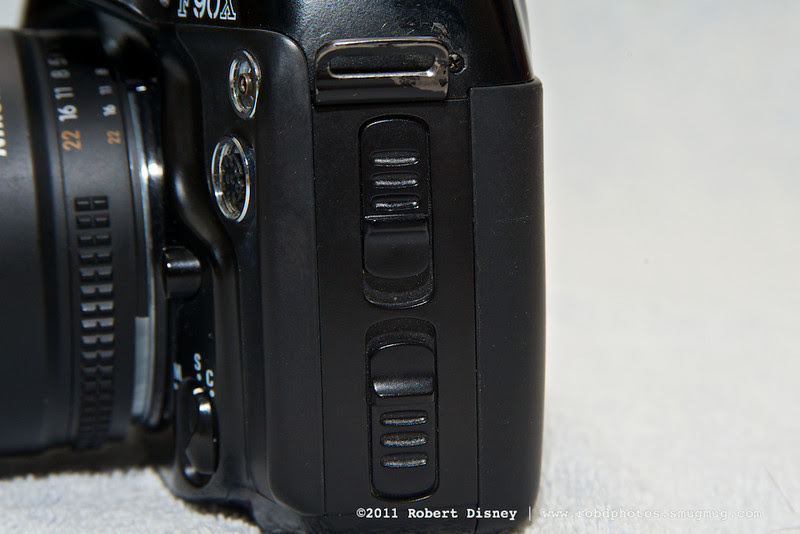 The film door is secure and only opens when two squeezable tabs on the left side of the body are pushed (seen above) at the same time. Accidentally opening the film door is therefore almost impossible. 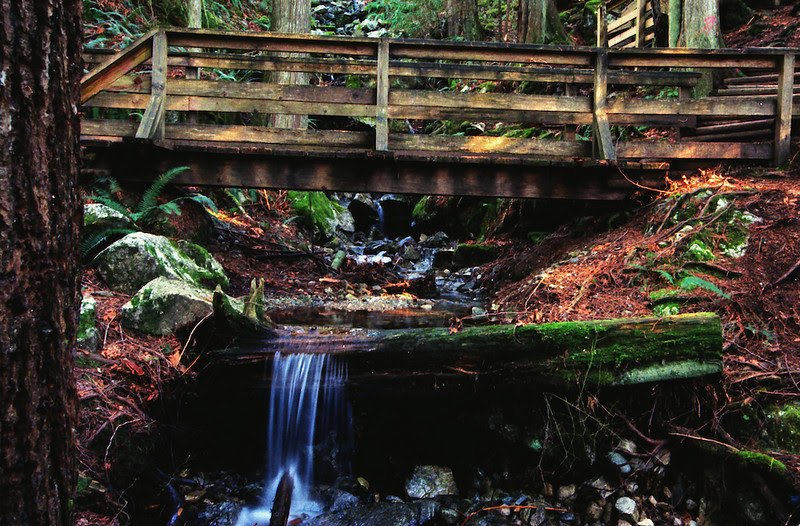 Metering and Auto Focus:
The metering of the F90X is very similar to current entry level Nikon DSLRs (in Matrix Metering that is). Based on what I have seen from the rolls of film that I have worked with, the camera does a good job of metering overall. I have noticed a slight tendency to underexpose on the odd occasion though. That may not sound like a problem, but difference is, with film you do not have a lot of leeway if you mess up the exposure. Center weighted and spot metering work the same way they do on any modern Nikon DSLR. 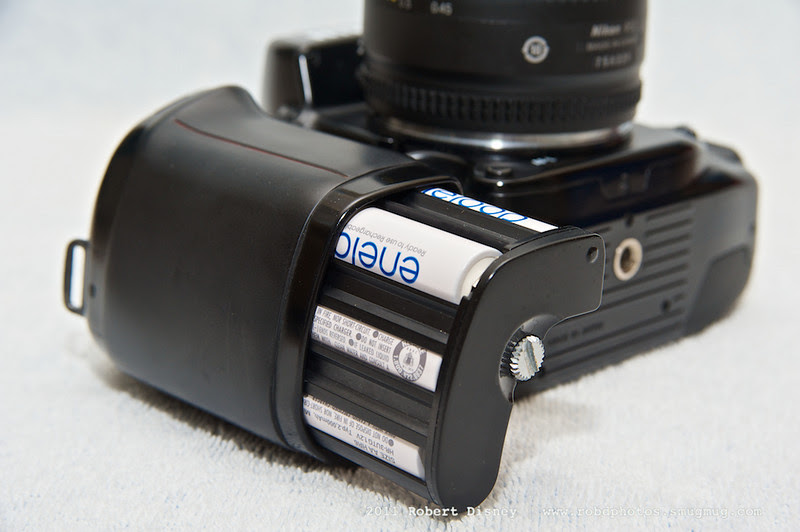 Auto focus on the F90X is very fast, whether it be via the built in focusing motor or if you use AF-S lenses. One thing to note, the AF motor on the camera is very squeaky, and I'm not the only reviewer who has mentioned this. Focus is fast and generally accurate, even in low light conditions. I found that the spot focus works much better than the wide area focus mode, in general. One important thing to remember with the F90X is that is has one auto focus sensor, which happens to be of the cross type. That means you will often have to focus and recompose, or focus on an object at the right distance in the center of the shot. It was common for a camera in the era of the F90X to only have one AF sensor, so although that may seem short sighted in today's world where most SLR cameras have 9 or more focus points, that was not the case at the time. One thing to note, although the F90X supports AF-S lenses, VR is not functional. 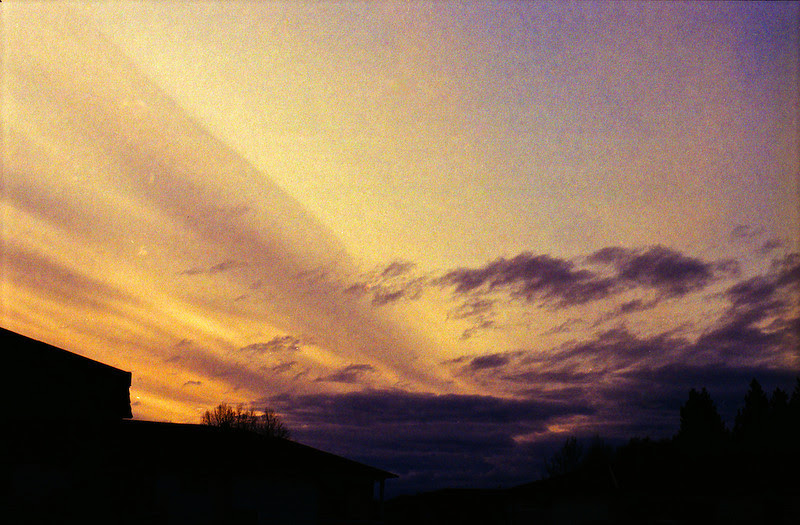 Comments and Conclusion:
The F90X/N90s is a film body, which would be a great camera for someone who wants to shoot film, but does not want to compromise in terms of build, auto focus speed, and easy of use, without spending over $100 for a camera like the F4, F5, F80 or F100. I was able to buy my F90X for $50 US dollars, and it is in great shape. You do want to be careful when buying older film cameras because they can be reaching the end of their life, so make sure you buy from someone you know, or a dealer with some kind of warranty or 90 Day refund policy.

In terms of actual use, the F90X is rather simple. There aren't hundreds of different settings to change, you can even use program mode and shoot with it as if it was a point and shoot camera, although I would not advise doing so. Since DX (not digital crop) coded film gives you the ISO setting, you just put the film in and forget it. Exposure controls work the same as on any SLR camera, in terms of the different shooting modes, which means there is nothing new to learn from that perspective. The only real difference is that you only have a roll of film to work with, so take your time when shooting! If you use a 24 exposure roll of film and use continuous high motor drive, you'll go through a roll of film in about 17 seconds! With that in mind, I would not recommend using a film camera for action or nature photography! I generally use film for landscape photos only, which is where it really seems to shine.

When it comes to film cameras the quality of your images come down to the type of film you use, and your composition skills, more than anything else. I have taken some nice shots with the F90X, but I am not overly impressed with ISO200 film, at least when looking at it on a computer screen. Pints of the photos on the other hand, look fine. One thing that I have noticed since I started shooting film again is that it has improved the rate of good images I take. I say that because shooting film slows you down, because each shot costs you something in terms of the film itself and the developing process. 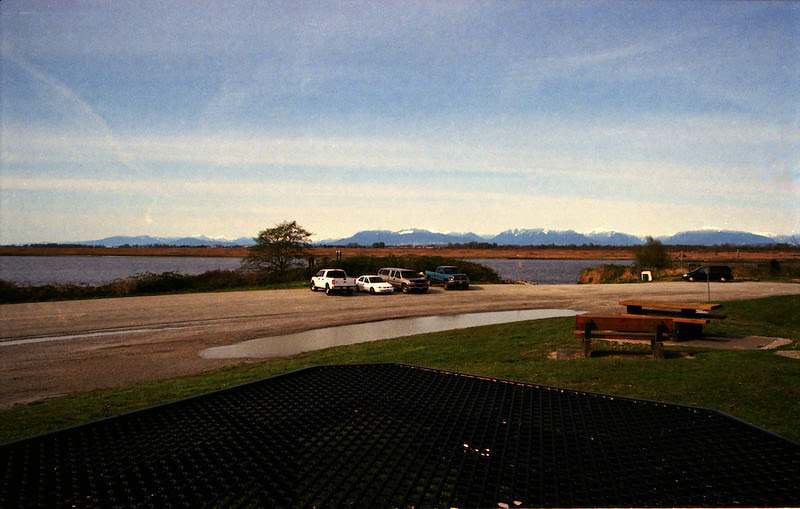 Who Is the Nikon F90X For?
The F90X and film cameras in general still have a place in the photography world, although it is quickly fading away. For those who are interested in shooting film, but don't want to spend a lot of money on a camera the F90X is a good choice. If you are a collector, this may be one of the cheapest Nikon film cameras to add to your collection, considering that cameras like the F100, F80, F4, F5 still sell for well over $100 US, if they are in good condition. Part of the reason that those cameras sell for more is some better features. The F100 has a more modern 5 point AF system (same one found in the D100, D70s and D50), as does the F80.

Who Is the F90X Not For?
People who do not want to shoot film anymore, or have no interest in collecting older cameras.
Posted by Robert Disney