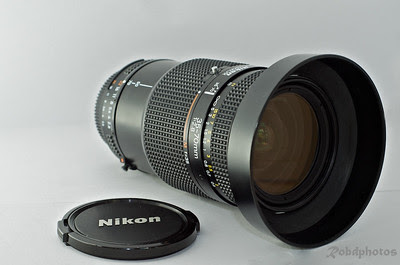 Build Quality:
The first thing that comes to mind when I pick up the Nikon 35-70mm F2.8 is, wow, this lens is well made, and the weight of it reflects that. Secondly I notice is the grip, which is really nice, regardless of what position the lens is zoomed to. The grip on the lens is a hard rubber, with bumps, which is why the lens is so easy to hold onto. The barrel is made of solid metal, with no plastic to be found anywhere. The only things plastic parts that come with the lens are the hood (HB-1), along with the front and rear caps. The lens does not feature weather sealing of any kind, and dust can be sucked into the lens while zooming, so you'd want to be careful using it in extremely dusty or wet conditions.

Auto Focus:
Auto focus is fast for a heavy screw driven F2.8 lens, and is acceptable across the entire zoom range. This lens hunts only in the darkest conditions, or when contrast is extremely low. As for zooming, the zoom slider, as I'll call it, is very tight on my copy, and sometimes it can be hard to adjust to the position you want for precise zoom based composition. I would say the lens creeps back in jumps and starts, rather than a smooth sliding action, which is okay from one point of view, since it does not suffer from zoom creep at any focal length. The manual focus ring is okay, and allows you to be rather precise, but I think it could be a little tighter. This lens also has a macro setting at 35mms, which is performed by pressing the small button on the zoom slider and twisting the zoom ring. Note that auto focus is not possible while using the macro mode. Focusing is really well damped in the macro mode, and for even more precise focusing turn off auto focus, via the switch on your camera body, and adjust focus with the manual focusing ring.

Image Quality:
In terms of optical quality, this lens is good, for the most part. Between 35-50mm it is very sharp across the range and has excellent contrast, and slightly subdued saturation, which is easy to fix later, or through picture controls if you are shooting jpegs. Beyond 50mm though, you start to see a drop of of saturation and contrast, which is particularly bad a 70mm wide open. Even stopped down it still isn't as good at 70mm as I would like. For example, I would say that in terms of saturation and contrast, the Nikon 18-70mm AF-S G DX is better stopped down. That being said, I'd rather get the shot at F2.8 than miss it because I was at F4.5 on the 18-70mm Nikkor. I generally found that I wanted to stop down to at least F4 to get the best results, in terms of sharpness, but the results at F2.8 are acceptable until you get wider, at which point it gets a little soft.

Comments:
This lens balances well on a Nikon semi-pro bodies (D200/D300/F100/F90X) really well, although I've not tried it with the battery grip attached to either of those cameras. Balance is okay on a D50, but like the semi-pro body, this lens balances well on a D80 or D90 with the MB-D80 battery grip attached, although the grip can get in the way of the zoom slider when zoomed to 70mm, making it hard to hold the camera steady for slower shutter speeds.
On that note, this lens is different from modern zooms, and even many from its own era, in that it uses a push and pull zoom mechanism rather than the traditional system of twisting the zoom ring. The ring does twist at 35mm, more on that later, and once you are used to this push and pull zoom system, it is okay. I still prefer the traditional zoom ring, to the push and pull system, but I wont throw the baby out with the bath water just because of that. The zoom has markings at 35, 50 and 70mm, and they are well spaced, and so they should be considering this lens represents Nikon's pro mid-range auto focus lens from 1987-1992, when it was replaced by the "D" version. The D version of the lens, which used the same optics, and was only discontinued 4 years ago in 2006, which tells you something about the optical quality of these lenses. One thing of note, the position on the zoom does not match what is shown in the EXIF data, in some positions. At 50mms, no matter how close I am to the 50mm mark on the lens, it always shows as 52mm, and at that position it does not match the 50mm 1.8D in terms of field of view.

Conclusion:
Not bad at all for a film or FX Nikon body, it has a nice standard zoom range for those cameras. A cheaper and lighter solution than many of the 24/28-70mm F2.8 zooms on the market. It is nice when I used it on my Nikon FE and F90X, but I wouldn't advise using this as your only lens on a DX body, unless you find yourself shooting in the 35-70mm range all the time. Overall, I'd say the optics are good, and aside from the relatively short zoom range, is worth the price, I paid $475 Cdn for my used copy.

As of March 2010, this lens is no longer part of my kit.
Posted by Robert Disney