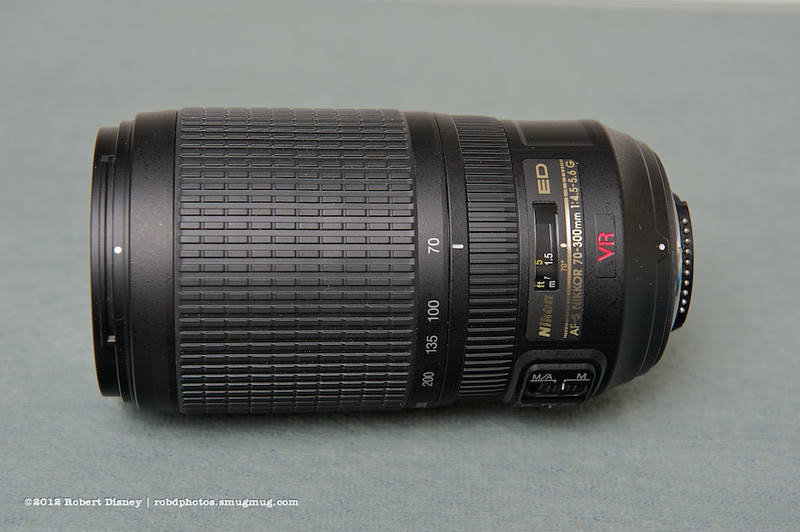 Introduction:
Nikon introduced the AF-S Nikkor 70-300mm F4.5-5.6G IF-ED VR a number of years ago to replace the aging and under performing AF Nikkor 70-300mm F4-5.6D IF-ED (and optically similar AF 70-300mm F4-5.6G). The optics of the lens were totally redesigned to meet the requirements of modern digital cameras, a Silent Wave Motor (SWM) focusing drive and vibration reduction (VR) were also added. The newer AF-S lens is heavier than the previous models, but the build quality and handling has been noticeably improved. The AF-S 70-300mm VR is a full frame lens, thus it is compatible with all FX and DX cameras Nikon makes.

Note that this review is based on use with the Nikon D700 (Full Frame).

Build Quality and Handling:
The AF-S 70-300mm VR is primarily made of industrial strength plastics, although of a higher quality than the kit AF-S DX 55-200mm VR or AF-S DX 55-300mm VR. The lens barrel feels tightly assembled and is solid in your hands. So despite being primarily made of plastic, the lens does not come across as cheap. The zoom ring turns smoothly, although it is a little tight around 135mm. As a result precise zooming is generally possible without too much fiddling. The lens extends as you turn the zoom ring towards 300mm, but the zoom tube is tight and does not wobble.

The small manual focusing ring, behind the zoom ring, turns smoothly as well. Manual focusing is not overly difficult, but like most modern consumer lenses it is not one I would want to focus manually on a regular basis. Two full turns of the focusing ring are required to get from 1.5m to infinity and there are no hard stops. The lens also features a metal mount with a rubber gasket to reduce the ingress of dust and moisture. Nikon does not considered the 70-300mm VR to be weather sealed, so it is not meant for use in wet conditions. 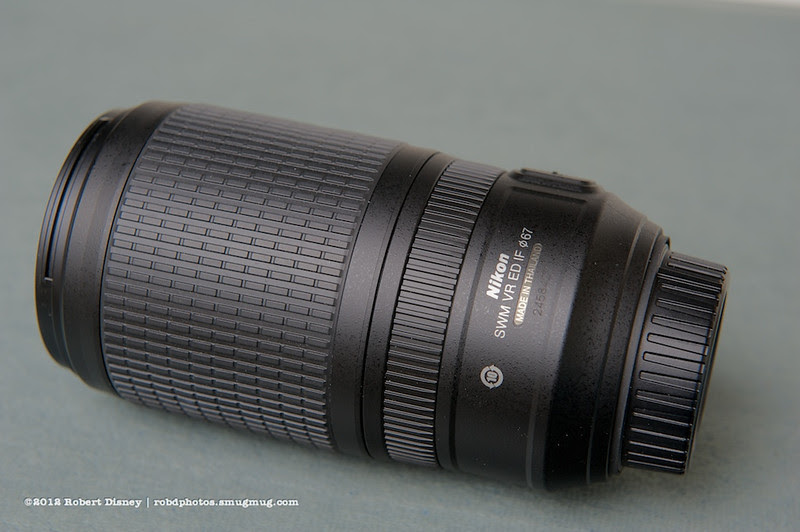 In terms of handling the lens balances well on larger cameras like the Nikon D300(s) and D700, but might seem a rather front heavy on entry bodies like the D3100, D3200 and D5100 (the 55-300mm VR is better suited for those cameras). The lens has three switches on the side. The top switch allows the user to turn on or off auto focus, while the second switch turns VR on or off. The third switch changes VR between normal and active mode (more on that in the next paragraph). 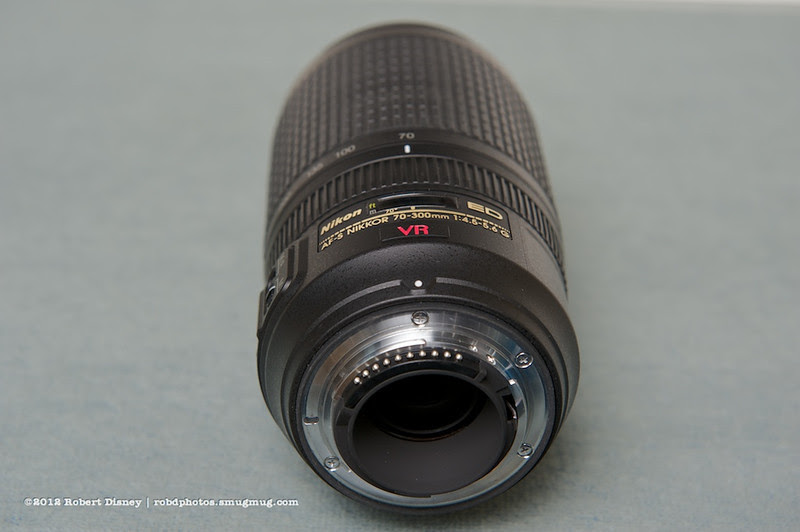 The vibration reduction feature works well, allowing shots to be taken at much slower shutter speeds than without it. VR has two modes, Normal (for when you are taking photos while standing still) and Active (use active when you are shooting from a car or boat for example). I was able to obtain sharp images zoomed out to 300mm at 1/125s, which is very impressive. Mind you, VR will not help you freeze action, so if you are shooting moving subjects a faster shutter speed is still required. The VR is very reassuring to use when you are shooting at 300mm without a tripod, but when shooting at shutter speeds over 1/500s it has been suggested that it is best left turned off. I haven't noticed any difference in image quality with VR turn on under those conditions, so I just leave it on most of the time. Note that using VR will effect the battery life of your camera.

Auto Focus Performance:
For a consumer grade lens the auto focus performance of the AF-S 70-300mm VR reasonably fast, but not on pair with the likes of the AF-S 300mm F4D IF-ED. Due to the smaller maximum aperture of F4.5-5.6, and weaker AF-S motor this slower performance is expected. The said the lens is able to track large slower birds while they are in flight, so if you are a birder on a budget it is still one of the best lenses in it's class in this area. 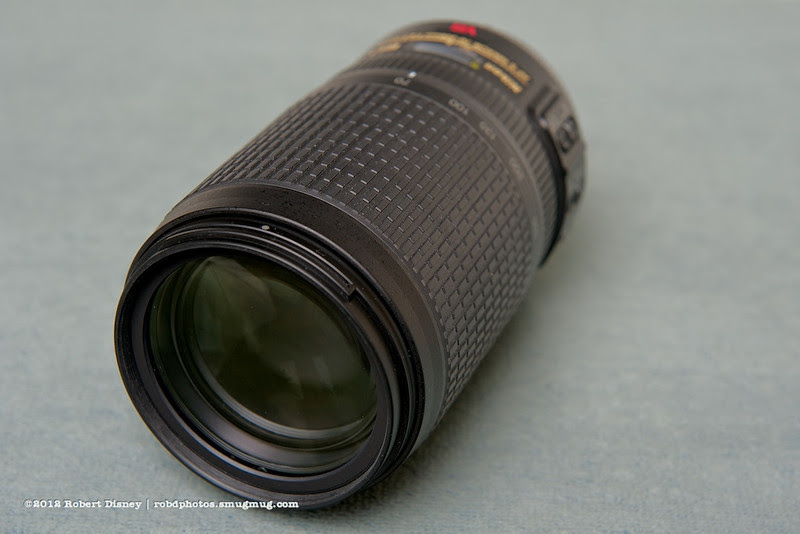 I think my biggest beef with this lenses auto focus is that there is no focus limiter switch. Having a limiter switch would greatly improve auto focus performance on distant subjects and reduce focus hunting, which I found to be an overly common occurrence. That being said, the AF-S 70-300mm VR is a consumer grade lens, so having a focus limit switch, a feature limited to higher end lenses, might be confusing to some users.

Image Quality:
The quality of images that you can capture with the AF-S 70-300mm VR are okay to good. In the 70-200mm range the lens performance is good, especially if you stop the lens down to F7.1 or F8. In between 200-300mm range performance starts to drop off and the lens really must be stopped down to F8 to get decent image sharpness and contrast. Overall image sharpness and contrast is okay, but not great. Like the sharpness, colour reproduction is good in the 70-200mm range, and starts to fall off at the 300mm end, as contrast is reduced. I recommend using the included hood, which can help improve colour and contrast under some conditions. Using the hood can also help to prevent damage to the front element of the lens in the event that you accidentally drop it!

Vignetting is noticeable at all focal lengths when the lens is used at the largest available aperture. Considering that the best performance of the lens is when it is stopped down slightly, this may or may not be an issue for some users. Vignetting would be noticeably reduced on a crop sensor (DX) camera like the D5100 or D7000. Wide open the lens also suffers from purple colour fringing or CA (Chromatic Aberrations) at all focal lengths in the corners of the frame. CA is reduced once the lens is stopped down, and does not seem to be a problem at F6.3 or smaller apertures.

The bokeh of the AF-S 70-300mm VR as been described as harsh or ugly by some, and I somewhat agree. At the shorter focus lengths it is does not look good, due to the largish maximum aperture of F4.5. Between 200-300mm bokeh is smooth, as long as the subject has space between it and the background. Overall I would simply say the bokeh of the lens is just okay.


Comments and Conclusion:
For a consumer zoom the Nikon AF-S Nikkor 70-300mm F4.5-5.6G IF-ED VR is a decent performer. Image sharpness, colour and contrast is good in the 70-200mm range, but does drop at the 300mm end of the zoom. Vignetting, CA and bokeh are areas where the lens comes up a little short, but none of these are terrible impediments to image quality in this case. The VR function of the lens works well for still subjects giving you the ability to get sharp images at least 3 stops lower than without it. Just remember that you still need a faster shutter speed for moving subjects. For the price (around $479 Cdn) you cannot ask for much more from this type of super zoom lens.

For birders out there just a few quick notes, to help if trying to decide between this lens and a lower cost telephoto prime like the AF-S 300mm F4D IF-ED. When directly compared to the AF-S 300mm F4D IF-ED, at 300mm, performance in terms of sharpness is similar at F8, but that is about it. Overall the prime easily wins in terms of colour reproduction, contrast and sharpness. Also remember that the 300mm F4 can accept the Nikon TC14E II 1.4x teleconverter, making at a 420mm F5.6. That extra 120mm might not sound like much, but on a DX camera that is an equivalent field of view of 630mm vs 450mm equivalent of the 70-300mm or 300mm lens alone at 300mm. For full frame users that extra range from the TC is almost a must for any squeamish birds. Of course the AF-S 70-300mm is easily more hand holdable, and I recommend using a tripod or monopod with the 300mm F4 (especially with the TC).

For serious shooting the AF-S 300mm F4D IF-ED is easily the better lens, but for a family vacation, someone on a limited budget or for traveling light the AF-S 70-300mm VR is a great lens to have.

If you are looking to buy this lens, you might want to take a look at the similarly performing and slightly less expensive Tamron 70-300mm F4-5.6 VC as well. Full frame users might also want to consider the 28-300mm VR for the greater zoom range, although performance of that lens is not as good at the long end and it is more expensive. On the used market the AF-S 70-300mm VR sells for around $400 Cdn, although was able I snag the one used for this review at $379 from a local camera shop.