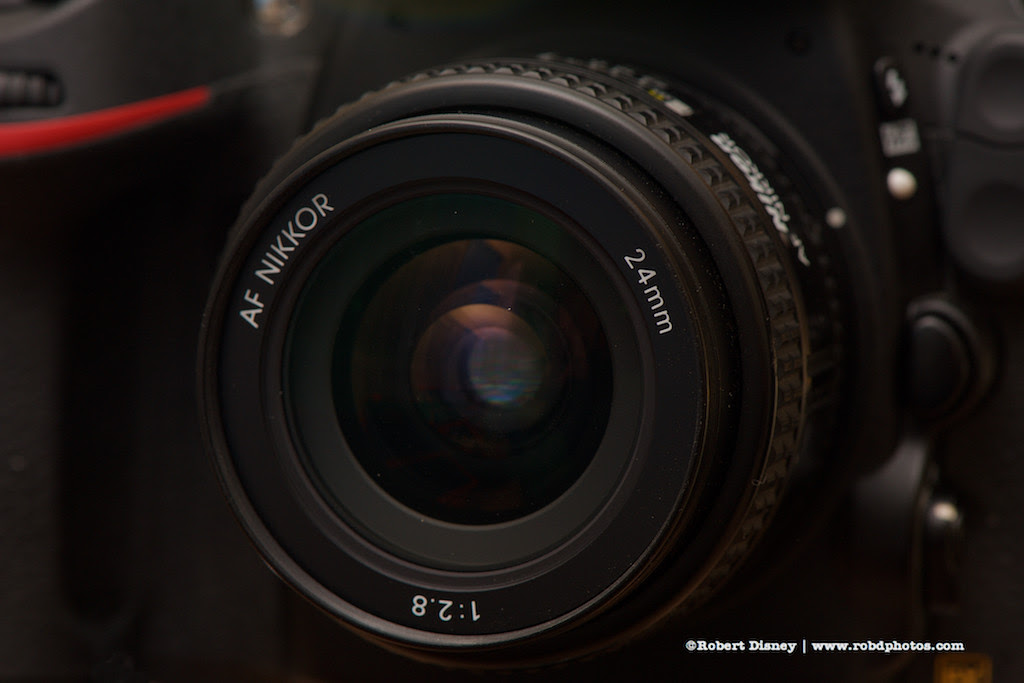 While modern AF-S Nikkor lenses offer great optics they tend to be lacking in the area compactness, something that the older AI, AF and AF-D lenses often excel at. This is particularly true when it comes to wide angle primes such as the AF 20mm F2.8, AF 24mm F2.8, AF 28mm F2.8 and AF 35mm F2. While none of these lenses are optically class leading, they offer a light weight option for those who need that above all else, while still working with a traditional DSLR system.

So the question is how do these lenses, with optical designs from the 1980's or earlier, perform on a modern DSLR with a 36MP sensor, such as the Nikon D800? My hope is to answer that question throughout this review. 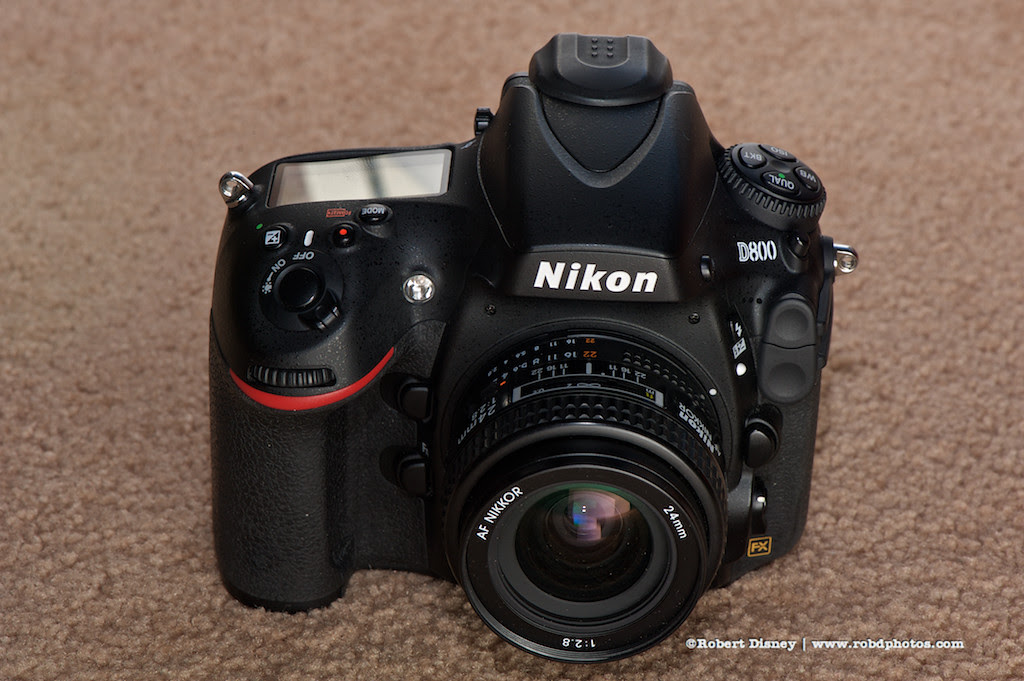 This review will cover the AF 24mm F2.8(n)*, which is optically identical to the other two Nikon AF lenses baring the same name. The first AF version of the lens featured a narrow plastic focusing ring, while this is the second of three versions of the lens, which has a wider rubberized manual focusing ring. What the 24mm F2.8(n) version lacks is the ability to send distance information to the camera, that the "D" version does. This also means that 3D Matrix metering does not function. Also, unlike the D version of the lens, the outer barrel of the lens does not  cover as much of the inner lens tube when focused to infinity.

Build quality is rather typical for a mid-range AF Nikkor, so if you have handled one of the other lenses in this class (AF 20mm F2.8, AF 28mm F2.8, AF 35mm F2, AF 50mm F1.4, AF 85mm F1.8) then you know exactly what to expect from this kit as well. The barrel is made of higher quality plastics that are tightly assembled, so there will be no squeaking when the lens is handled. While this might feel a little cheap compared to all metal AI-S or high end AF-S Nikkors, it is not that bad. The inner lens tube, which holds the optics, is metal. The outer barrel is smooth, unlike modern Nikkors which have a slightly bumpy finish.

Being an older AF lens the body features a physical aperture ring, making the lens compatible with almost every Nikon F mount camera ever made (metering would not function on non-AI cameras).

The manual focusing ring is smooth, and there are hard stops at both ends of the range of focus. The limited travel of the focusing ring makes manual focus difficult, even when using the liveview function on modern DSLRs. When used with a camera equipped with a split prism focusing aid, manual focus is relatively easy and quick. In addition the distance scale on the lens is not overly helpful, thanks to the limited travel of the focus ring. This means that the scale is not overly helpful for hyper-focal distance shooting, even though it has marks for use at F11, F16 and F22.

Size wise the AF 24mm F2.8(n) is rather compact for a full frame (FX) compatible lens. This compact nature of the lens becomes truly apparent when put beside a modern pro F2.8 zoom, such as the AF-S 24-70mm F2.8G.

Like all earlier AF lens the AF 24mm F2.8(n) will only auto focus on cameras with a built in focusing motor, due to the screw driven focusing mechanism. While the camera will meter, auto focus will not function on lower end Nikon bodies like the D40(x), D60, or cameras in the D3xxx and D5xxx range.* In terms of auto focus speed this lens is rather quick to lock on, although that will be somewhat dependent on the camera used. I mention this because higher end bodies (D700, D8xx series, D3 series or D4 series) will be every so slightly faster thanks to stronger focusing motors, than when used on lower end bodies such as the D50, D70(s), D80, D90, D7xxx series, D6xx series or the D750. Due to the light weight lens elements and short focus travel, any speed differences are unlikely to be noticeable in real world applications, since it would come down to fractions of a second.

* Auto focus is also not possible when used with Nikon 1 bodies and the FT-1 F-mount adaptor.

The optics found in the AF 24mm F2.8(n) (and current AF 24mm F2.8D) date back to the earlier AI-S 24mm F2.8 first sold in 1981. The lens features 9 elements in 9 groups, some of which have Nikon SIC (super integrated coatings), a technology used in all non Nano Crystal coated lenses, which is meant to reduce flare. The coatings seem to work well enough, although direct sunlight will cause flare under some conditions (see sample below). The optional Nikon HN-1 hood helps, but only with light coming from the extreme sides of the frame. There are no ED elements, typical for primes of the era, so chromatic aberrations can be rather severe in the corners of the frame. This becomes rather apparent in any situation where there are strong colour shifts in an image (see sample below).

The lens also features close range correction (CRC) designed to help the lens focus accurately at all distances, which is important for a wide angle lens. Earlier non-AI versions of the 24mm F2.8 that lacked CRC would be softer at close focusing distances.

Thanks to the relatively fast maximum aperture of F2.8 the lens allows a decent amount of light to travel through, making for a bright viewfinder experience in all but the lowest light conditions.

In terms of overall image quality the AF 24mm F2.8 cannot match modern primes or zooms in terms of absolute resolution or sharpness. Both the Nikon AF-S 24-70mm F2.8G and 16-35mm F4G VR are sharper at the 24mm setting. While the centre performance of the prime is reasonably good, the edges are much softer than the previously mentioned zooms. This is even apparent on lower resolution 12MP cameras like the D700, not just the D800 series cameras.

This older prime does have one optical advantage over the 24-70mm F2.8G though, far less barrel distortion, which means less data to throw away while correcting for the issue in post production (or in camera for jpegs). Of the three the 16-35mm F4G ED VR has the least distortion, but that is almost a given, considering where 24mm falls within the lenses zoom range.

Here are some image samples, first showing centre sharpness of the lens at F2.8. One can also see that the bokeh is not that bad, in situations where the subject is close to the camera. 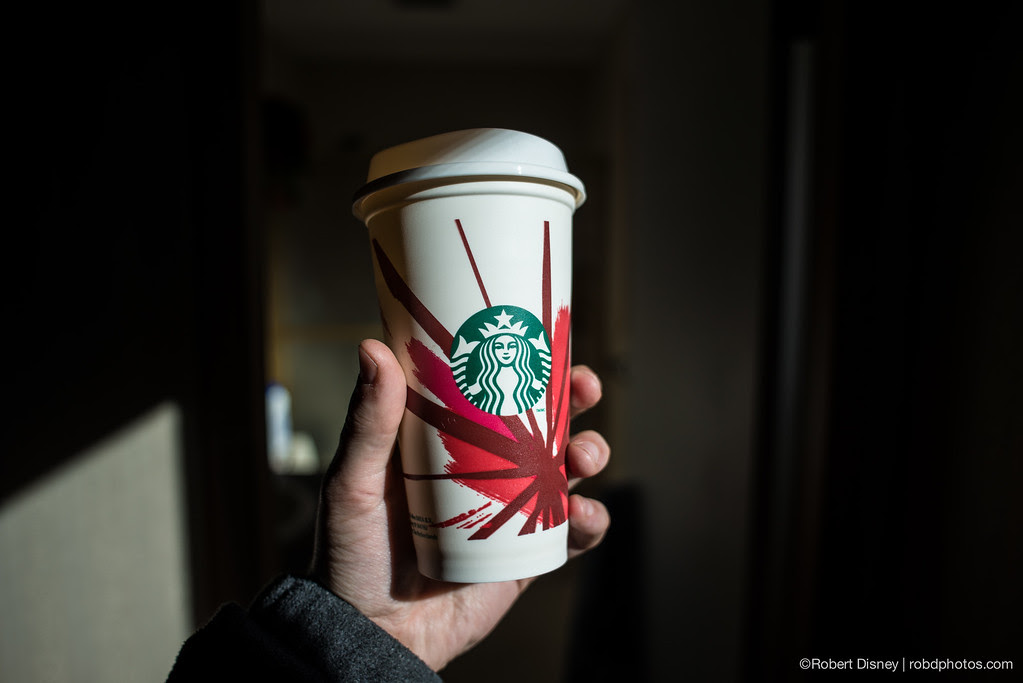 The image above is the full image, with the focus point being on the Starbucks symbol. Below is a 100% crop of the same image. 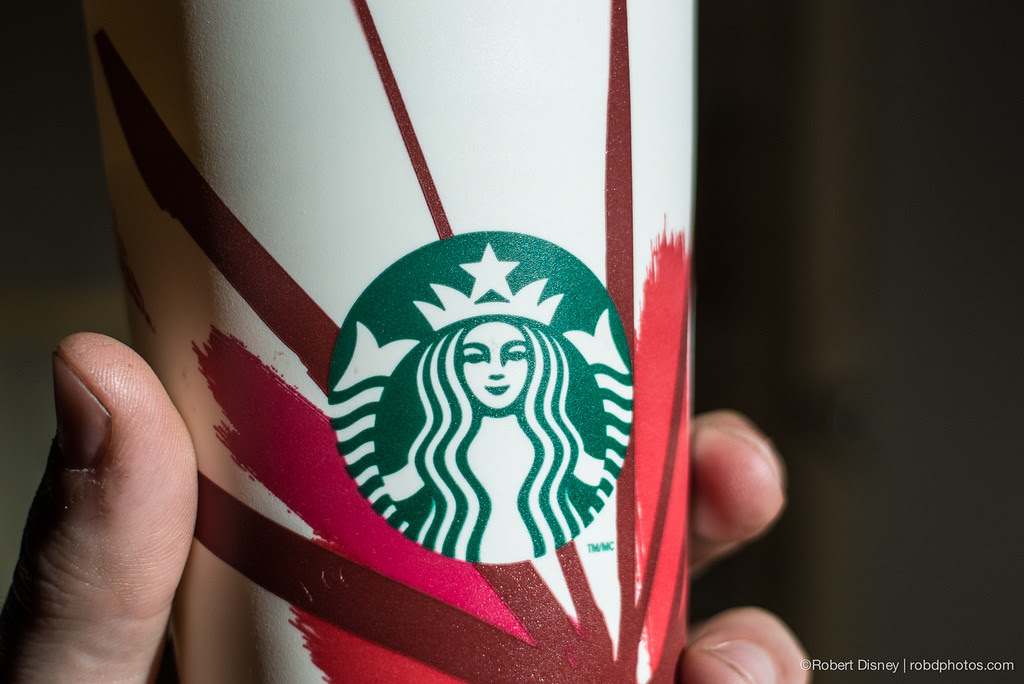 As displayed in these two images, at least at typical website use sizes, there is no discernible difference. Even at 100% there is no major change in sharpness. The 24-70mm F2.8G has better contrast in harsher lighting conditions, but otherwise they are close. The sample photo might not be the best example, since diffraction is lowering the sharpness of both, but even with that neither is discernibly better or worse. There are some slight colour differences between the two lenses, but can be attributed to optical coatings (the same basic adjustments and white balance were used in Lightroom). Overall, the results from the AF 24mm F2.8(n) are not bad for a lens with optics that are 25 years older! Keep in mind that these differences are even less apparent on lower resolution bodies. 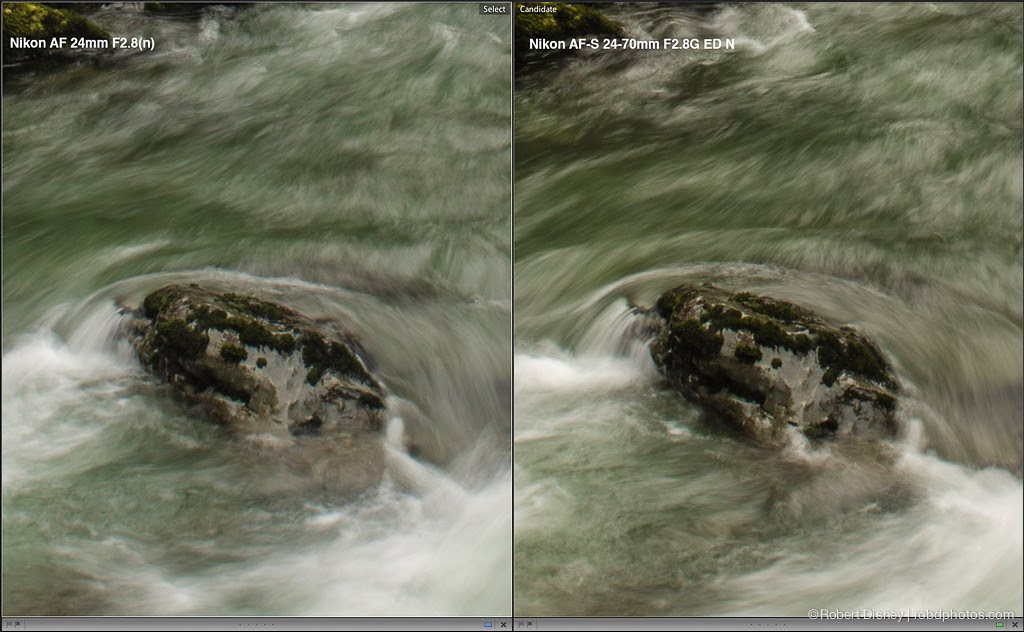 The Nikon AF Nikkor 24mm F2.8(n) offers photographers using Nikon FX format cameras a wide angle of view in a small, light weight package. While the optics of this lens are dated, it still performs rather well against the like the modern AF-S 24-70mm F2.8G, when stopped down to F5.6-F10. In addition, while the build quality of the lens is not rock solid like an older manual focus prime, or pro zoom, but it is better than some basic kit lenses from the same era.

In terms of auto focus the lens is very good, in all but super low light situations, where just about any other lens would suffer a similar fate. Focus is by no means silent, since the lens requires the use of a camera with a built in screw driven motor. Thankfully the lens tends to focus quickly, so the noise created while focusing tends to be short lived.

Optically speaking the 24mm F2.8(n) is showing it's age, at least outside of the centre of the frame. In the centre it comes very close to modern rivals in real world usage. The difference might be noticeable in large prints that are viewed close up, but for typical web use nobody will be able to tell. In terms of edge sharpness the AF-S 24-70mm F2.8G and AF-S 16-35mm F4G ED VR are far superior, but both lenses are larger and heavier.

Flare and chromatic aberrations are visible flaws, that are typical for a prime of this era, and they show them selves in this lens as well. Most modern software will correct the chromatic aberrations rather well, so it is not a big problem. Flare can ruin an image, but presentation is rare, and does not show the characteristics of super wide angle lenses like the Nikon 14-24mm F2.8G.